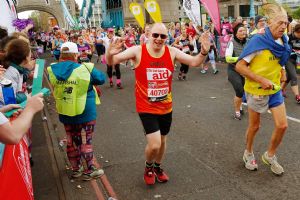 The Revd Chris Parker had a great time completing the London Marathon in April.

The minister of Trinity URC Wigan and Tunley URC said, "The Marathon was amazing; the worship on Saturday night, at All Hallows by the Tower, for the Christian Aid runners' families and friends - and representatives of the London Marathon organisers and other charities - started us off brilliantly.

"The day was really enjoyable, the event was superbly organised and everyone in the race - the crowd, the marshals and the charity cheerers - were excellent. 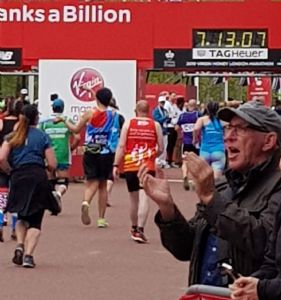 "My time suffered due to my calf muscle giving me a twinge at mile 14. I decided to walk (as fast as I could) the rest of the way. Up to then I was doing fine. I'll have raised over £2500 for Christian Aid by running the Marathon, so many thanks to all those that have donated.

"I am still a bit stiff but that is nothing compared to the poverty and injustice suffered by those Christian Aid support and campaign for.

"I thought I would say never again but I may do something similar again in the future. That says a lot about the day. I will probably never eat another jelly baby though!"