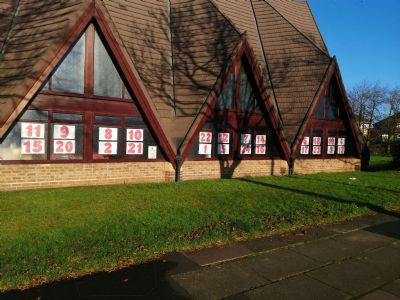 With the lockdown at the end of November the elders of St Columba, Hunts Cross, considered how they could show to their community the Christmas story.

The church design is such that each ‘wall’ is effectively three large windows, one side of which looks out onto one of the major roads of the area. On the suggestion of one of the members, the elders agreed that these windows be used as a large Advent Calendar.

When the numbers were replaced with images, those on the centre window were to be religious in nature but the other two windows could have more secular images as is normal in Advent Calendars. Two members of the congregation went to the church each day and changed the numbers for a picture. In addition, two other members of the congregation weekly added in the upper outer windows, the four candles of Hope, Joy, Peace and Love.

On Christmas Eve the upper windows of the centre window had a manger scene added to complete the Advent Calendar.

The comments received have been positive and it has been noted that passers-by have stopped to look at the windows. Therefore we feel that it has been a worthwhile venture.