Our Green Apostle Richard Pearce reported: The first week of COP26 has produced a wide range of commitments and pledges on measures to limit global warming, addressing issues such as halting the loss of forests, cutting methane emissions and phasing out coal power generation. New net zero carbon pledges, including from major emitters like India, now mean that 90% of the global economy is covered by net zero commitments.

However, the president of the UN climate talks, Alok Sharma, said on Tuesday there was still a mountain to climb towards a goal of capping the global temperature rise at 1.5 Celsius. He said that COP26 officials would soon publish the first draft of the so-called cover decision, which summarises the commitments of more than 190 countries, in a bid to focus minds in the three days remaining.

The Climate Action Tracker (CAT) research group put a sobering number on the size of the task at hand, saying that all the national pledges submitted so far to cut greenhouse gases by 2030 would allow the Earth's temperature to rise 2.4C from pre-industrial levels by 2100.

Scientists say 1.5C – the aspirational goal set down in the 2015 Paris Agreement – is the most the Earth can afford to avoid an acceleration of the intense heat waves, droughts, storms, floods and crop failures it is already experiencing.

*COP stands for Conference of Parties under the 1992 UN Framework Conference on Climate Change (UNFCCC). See https://ukcop26.org/ for more details.

Rise to the Moment 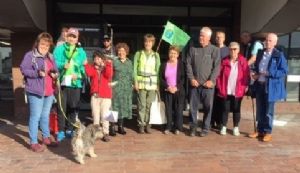 A group of Christian pilgrims, including URC Mersey ministers Cath Atkinson, Diane Barrow and Moderator Geoff Felton, walked from around Merseyside and gathered at the Anglican Cathedral in Liverpool to pray and campaign for change around environmental and climate issues. The event was part of a national relay in preparation for COP26, organised by Young Christian Climate Network. https://www.yccn.uk/ 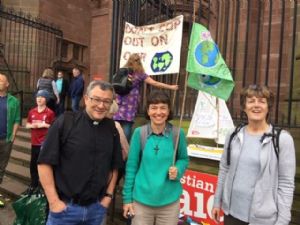 Cath explained, ‘In support of climate justice, eight walks were arranged across Merseyside over two days in October. Over 50 churches engaged with the campaign and more than 200 walkers joined in across two days; thousands of prayers were carried, some wheeled in trollies as there were too many to fit into backpacks – wonderful! It was great to make new friends and chat along the way, knowing that others also were walking to show their support.

‘We set off from Ormskirk Street URC (Marie Rimmer MP, pictured above right with walkers,  offered words of support before we began). The walks went well and it was great to see so many walking to show their support.

There are still things we can do: