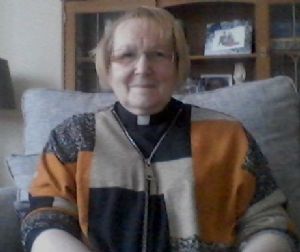 It's been a since the first lockdown in 2020 and URC Mersey ministers have written articles about the challenges – and opportunities – during the last 12 months. Here the Revd Dawn Mather, of URC Isle of Man, reflects...

A year in the life of a pandemic

As I sit to write this article, we have just been told we have a three week lockdown. Despite that, I am aware of how blessed we have been on the Isle of Man during this last year of the pandemic. Early on, our borders were closed and the few cases we had were mostly concentrated within a nursing home in the south. Although tragic for those who died, and their relatives, the Government were quick to lock down the home and track and trace others who could be carrying the virus.

The Isle of Man’s government had learnt a lot about track and trace during a flu epidemic and have been using the same tried and tested method of shutting down the spread of contagion.

Throughout, the penalties of breaking the rules have been severe, prison time and large fines. The government were regularly doing spot checks on those who were asked to isolate. The highlight of recklessness being a young man who was imprisoned for using a jet ski to land on the island illegally after being refused entry from the UK to visit his girlfriend.

Took up the challenge

The island is built on strong community bonds so my confidence in elders and members keeping in touch and supporting one another in our first lockdown was high, and they didn’t disappoint. The elders took up the challenge to support the families on their list. We set up a mailing list for all who attend church so we could email news and highlight resources, as well as instigating a monthly pastoral letter. For those not on email we posted through their post-box. It helped that we had already established a webpage and a Facebook page, and this became another way to stay in touch.

In the north of the Island, where we are beginning a new LEP, we tapped into the organised Methodist links for a Sunday service. However, St. Andrew’s, Douglas, had some new skills to learn, as we had not gone down the route of online services before and we had few within the church with the technical skills to take this on board. Those who had a little expertise helped to get a short reflective worship up and running and in the second lockdown I bought a new computer so I could continue to do ‘Worship from the manse’, as I was not allowed into the church.

I will always remember the Sunday we came back into the church after the first lockdown. It was a full congregation and we all realised how we had taken our coming together for granted over the years. There were so many smiling, happy faces, as we experienced being together again. We were even allowed to sing!

Some of the issues that faced the congregation had to do with not being able to leave the Island to see family, some of us have not seen our families for over a year, even when the UK was open for travel, we needed permission to leave and to return, this was usually only allowed for bereavement and hospitalisation. As we could not be certain we would be let back onto the island many of us have not pursued leaving. There is also a very clear understanding of how we want to support the island community, many have commented that they are willing to stay because they want to keep the island safe from any variant of the virus that may mean an escalation of infection.

The most affected by the restrictions have been those who have had to go to Liverpool for operations or treatment as each time they needed to isolate before and after leaving the island. We were ever conscious of those who suffer from mental health issues, the lockdown was especially hard on them. In our time online, and by phone, we tried to concentrate on supporting them, although thankfully most had families or very good friends on the island. It was obvious however that the experience had taken its toll.

The second lockdown felt harder, mostly due to the time of year. The weather was bleak, but also because we knew what we had gained and lost. It was a three-week intervention and we easily reverted back to the learnt practices of the first lock down. We were free of restrictions,  living our lives as normal, the shops are open, and the businesses, but we have just gone back into a three week lockdown.

Throughout this time our focus has been on those whose lives are not so free, those who are fatigued with the measures to ensure their safety, and those whose lives have altered through the death of a loved one. Manx people are grateful to their government for their handling throughout the pandemic and will continue to give thanks for all those who have worked ceaselessly to care for others. Now, as in England, we are beginning the process of inoculation which we hope will allow us once more to travel off island.

Grown in humility and creativity

It has certainly been a year to remember, and we give God thanks for those things we have learnt about being community and about being church outside of a building.

We have grown in humility and creativity, learning new skills, and exploring new ways of supporting others in prayer. As my grandfather would say ‘there is always a silver lining’ we just have to look for it.