Band player, industrial worker, RAF serviceman: who is he? 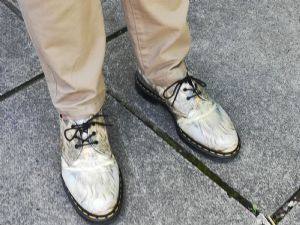 You may know him as one of the ministers who plays in Café Jam or Folkus Gallery Band… but if we mentioned his colourful Doc Martens, you’ll guess straight away.

The Revd Malcolm Fife is retiring after 21 years in ministry, a career that has culminated in Haydock, Newton-le-Willows and Huyton. It started in West Sussex and has included being an industrial chaplain to factory workers.

Malcom was in the RAF for 22 years when, ‘At the end of my time there I started feeling there was something I had to do, but couldn’t find out what it was. So I attended taster events of different jobs, tried all sorts. My minister said to look at preaching so I went to an enquirers conference and while there I got a very definite call to move into ministry. I was 41. ‘

After three years at Westminster College he was ordained in 2000.

Malcolm has been in the URC Mersey fold for four years and remembers his highlights. 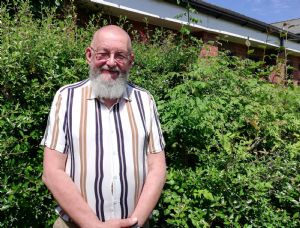 ‘In Haydock we’ve done a lot of work with kids which has been fantastic. We started Messy Church – the first one had 160 people attend and after that it settled into a regular 50-60 people. The church is trusted by the community in a big way in Haydock.

‘At Newton-le-Willows there is general outreach to the community which is amazing. In normal times there are coffee mornings attended by non church goers.’

‘Although Huyton is a small church in numbers, there have been events to help with outreach to the local community such as plants sales and Christmas fayres. We also ran a lunch club for the elderly, which was interrupted by the outbreak of Covid.’

Malcolm was one of the founders of Folkus Gallery Band, formed for just one service, It went so well it continued and on 31 July the band will be doing a gig to raise money for vaccines for key workers in Africa.

Looking back one of the main highlights was as an industrial chaplain, ‘It was wonderful. I went into the big factories in the Midlands, and was there for people in their lunch of coffee break. Or I was attached to a town centre or even in Asda. I was a bit of a pilot for Work Care. These venues were tried out on me and if people responded they brought in permanent chaplains. I loved it. I had to win people’s favour, spend time in the cafes. If people wanted to talk they came over. It was fascinating. I did the town centre on market day and I was sought out by the traders rather than the buying public. I even led the carol singing at the Christmas lights switch on! It was very rewarding.

‘It's been the most amazing job you could ever want to do, the variety within a day keeps life exciting, I’ll miss it.’

And what are the Doc Martens all about? 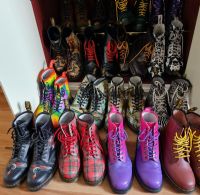 ‘I bought a wacky pair once and people commented. I realised it was a great conversation starter, makes me more human, so I kept buying them!’

‘I’m moving to Wigan and will stay involved in Folkus and Café Jam so I’ll definitely see people around.’